Meanwhile in Taiwan Roomba and Scooba wage the robot war, in Germany still rules the technology of the last millennium. 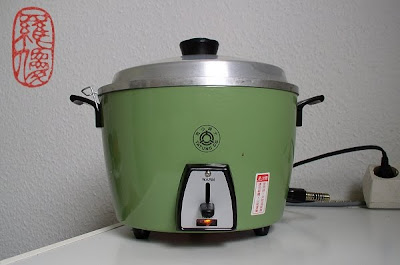 In 2005 my wife brought the device from Taiwan. When she acquired it in Kaohsiung first the clerk of the household supply store presented her a big choice of excellent high tech rice cookers, well equipped and chip controlled. The wish of my wife to use the item in Germany and therefor the need to run it with 220 voltage shrinked the selection enormous and also the joy of the Taiwanese - my wife and the clerk - about finest and most advanced technology: Only the Tatung TAC 20 seemingly with the design and technique of the 1960s in the lowest corner of the shelves fulfilled those demands.

Anyway the cooker is robust and daily without any problems in use. Thanks to the internet and downlaodable manuals even Luo You could get the knowledge how to use it. „Wo de Tai Tai" (my wife) had the opinion before her last longer stay in Taiwan, that she didn´t need to give me detailled explanations because of it´s simplicity. Besides she supposed I won´t use it too. But, wrong!

The rice cooker is extremely useful for a fast dinner: 2 cups of rice into the inner pot, fill it up with water til the indication, some water according the measuring cup between the inner pot and the outer container of the heater, then switch it on. After 15 to 20 minutes the slackly-flaky rice is ready. 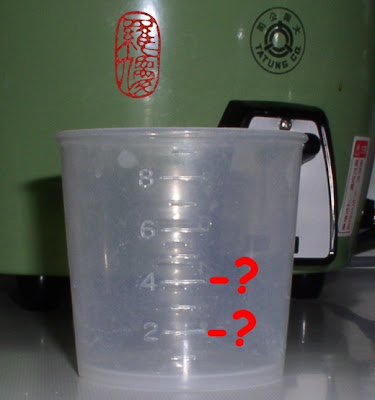 The extremely old Taiwanese rice culture competes with the German engineer´s spirit. A human, formed by countless salty potatoes during his childhood and few cooking bags of rice, discusses with a person of a country, that nowadays only know computer controlled rice cookers. The design of the 1960 almost extinguished. Besides, in Taiwan only my mother-in-law cooks the rice. But better not to provocate further more ....

The result of the different preparation of rice - "a la Taiwanesa" and "a la Alemán" - is thoroughly comparable. Here with Kung Bao Qi, Broccoli and "Federweißer" (still fermenting young German wine): 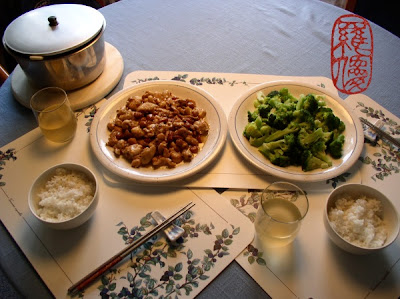