How proud was my hairdresser when she got few years ago the territorial exclusivity for artificial hair extensions of a specific company – according her opinion the best one in this area. The japanase movie „Ekusute“, that will be shortly released on DVD in Germany, shows that hair extensions can also become a terrific horror.


Luo You discovered the work by the comercials on the Taiwanese tv-channel CTITV, that you can also watch in internet. Here is the music video trailer about the movie:

In the horror movie the vivid hair extensions cause suicids and accidents.

Now we know: Not the pressure to perform, the stress of density and over population, not the risky driving style and the poor road design, that is mainly focused on speedy car traffic and wide lanes, are the reason for the higher suicid rate and number of victims on the roads in some countries. The real cause are dangerous hair extensions.

Exactly 6 months ago I saw a very strange performance in Kaohsiung: Squeezed in the small space between the entrance of a parking lot, the concrete wall of the coast line, parking scooters and cars a group of professional actors showed their best. However, nobody was really interested in them - except a stray dog and an innocent LuoYou. 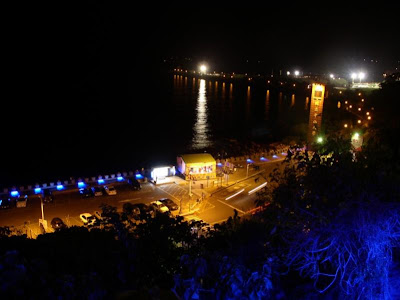 The place where it happened was the former British consulate in Kaohsiung, which is situated at an extremely prominent place of the city. The building, that the British erected in 1865, crowns the rock northern at the entrance to one of the biggest container harbours in the world. There is still a splendid view to the whole city. Few years ago the area was renovated and is now a first class destination for a nice dinner and to observe the sunset. 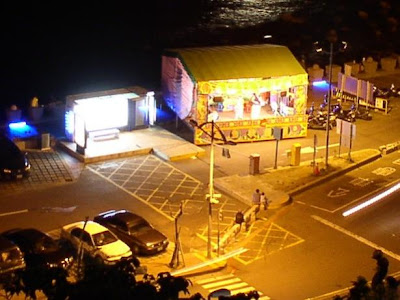 Next to the consulate is a little temple. The performance was related with the sacred place and served religious purposes. In the Christian culture people order and pay for a mass, in Taiwan people donate for a theater play dedicated to their God. 10 or 20 years ago this activity was a big event that gathered a village or quarter of the city. Meanwhile television, internet and pc-games created alternatives and lowered the number of spectators down to zero.

No problem, the professional actors say, first we are playing for God and second we are paid. But somehow it´s a pity that people don´t look at them, because they make so many efforts. So, the only hope is, that God at least still watches them and did not yet turn to the modern media, too. Well, the loudness reaches a level that even superior creatures can´t ignore them. Next to the enormous loud speakers of the street theater and the noisy music of the restaurant a flutist - engaged by the city government - played his instrument with an electronic booster. First I had the idea he is a part of the theater play. But my wife explained that the actors had their own orchestra behind the stage. The city government wanted to raise the cultural level at this place by the sounds of fluid. 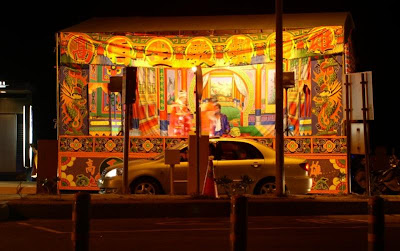 Will the car driver notice the high cultural level of this place, while the barrier of the parking lot permantly squawks „Cordially Welcome!" 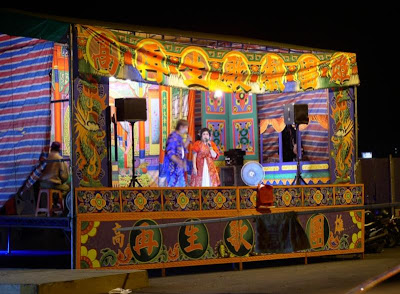 As a tourist Luo You was very excited what happened on the stage. The play could compete with every Korean, Japanese or Taiwanese soap opera in the local television. But Luo You´s wife was impatient and had the car keys.

Last Sunday came the déjà vu. The German television channel ARD broadcasted a report about the temple of Cao3 Tun2. According their report the town is quite famous for its puppet play. But, the same phenomenon was visible: no spectators, although the best puppet players of Taiwan gave enthusiastically their best and an excellent show! Only God witnessed their achievements. I wonder how the German television got the inspiration for this report.

The journalist of ARD also met a worshipper in the temple that feels a strong connection to God by burping up. Quite interesting! Even my wife never saw this before.
Eingestellt von Luo2 You1 um 21:25 Keine Kommentare: